According to the United States Census Bureau, the difference between median earnings for men and women in Maine who worked full-time, year-round in 2019 was $10,237.

Augusta, ME (STL.News) Governor Janet Mills has proclaimed (PDF) March 15, 2022 National Equal Pay Day in Maine, symbolizing how far into the year women on average must work in order to earn the same amount that men did as of December 31, 2021.  Nationally, women working full-time, year-round are on average paid just 82 cents for every dollar paid to men.  The wage gap is even starker for women of color.  Nationally in 2020, African American women made 64 cents on the dollar, and Latinas just 57 cents on the dollar compared to white, non-Hispanic men.

“We are making strides in paying women an equal wage, but there is more work to be done,” said Governor Janet Mills. “On this Equal Pay Day, let us recommit to paying women fairly and equally – based on their experience, their responsibilities, and their qualifications – so that we can level the playing field for women across Maine and ensure that our state provides opportunity for all.  Not only is it good public policy, but it’s the right thing to do.”

Requirements regarding equal pay have been a part of Maine law since 1949, but wage inequality persists.  To promote pay equality, Governor Mills signed legislation in 2019 to discourage employers from basing wages on an employee’s salary history.

“Equal Pay Day falls on March 15 this year – the earliest in the year it has ever been since it was first observed in 1996. While that is progress, there is still work to do to close the pay gap, especially for women of color,” said Labor Commissioner Laura Fortman.  “While women overall have had to work until half-way through March to earn what men already earned in 2021, we know that on average women of color do not reach the amount that men made in the previous year until many months later.  We must redouble our efforts to make significant progress toward pay equity for all women.”

Nationally, the average differences in median earnings between white, non-Hispanic men and women of color are $24,656 for American Indian and Alaska Native women, $23,831 for Black or African American women, and $5,232 for Asian women.

According to a new visualization tool by United States Census Bureau using 2019 American Community Survey data, the average difference between median earnings for men and women in Maine who worked full-time, year-round in 2019 was $10,237.

According to the 2015-2019 American Community Survey 5-Year Estimates, the five occupational groups in Maine with the largest wage gaps are firefighting and prevention;  legal occupations;  health diagnosing and treating practitioners; architecture and engineering occupations;  and arts, design, entertainment, sports, and media occupations. 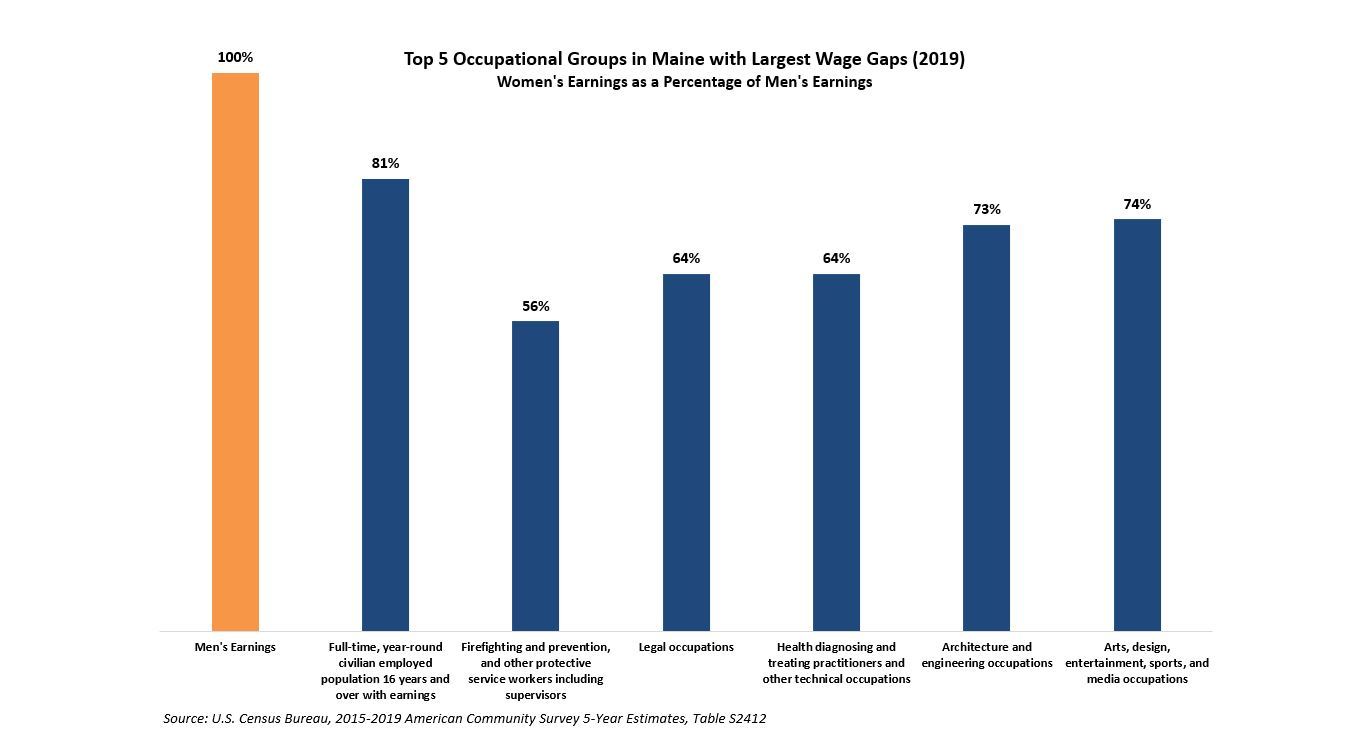 “Women – especially women of color – not only make less money than men for the same work but are also more likely to work in jobs that have been undervalued and underpaid.  And research shows that when women join industries that pay more, wages go down as employers value the work less,”Destie Hohman Sprague, Executive Director of the Maine Women’s Lobby, said.  “We will not achieve gender equity?until we achieve pay equity.”

Relatedly, the Maine Women’s Lobby recently published a report on how lifetime economic disparities result in higher rates of poverty for older women.

“Given the significant impact that the COVID-19 pandemic has had on women and families, it is critical that the State of Maine address equal pay and gender equity in policies and programs supported by the Maine Jobs and Recovery Plan so that women receive the training and support needed to be successful in the workforce with equitable pay and benefits,” Gilda Nardone, Chair of the Women’s Employment Committee, said.

“While the wage gap experienced by women is narrowing, the progress is much too slow and the COVID-19 pandemic has made the need to change that much more urgent,” Cynthia Phinney, President of the AFL-CIO, said.  “One thing that moves the needle on wage levels and wage equity is belonging to a union.  Union members in general earn higher wages than their non-union counterparts doing the same or similar work, and the pay gap for union women is smaller.”

Maine’s Equal Pay Law requires that employees be paid the same wages as employees of the opposite sex for work that is of a comparable nature in skill, effort, and responsibility.  MDOL’s Bureau of Labor Standards, who enforces the Equal Pay Law in Maine, has a poster (PDF) available for employers free of charge that outlines the basics of the law:

Anyone who believes they are not being paid the same wages as an employee of the opposite sex for comparable work, should file an equal pay complaint.  The Maine Department of Labor has a printable equal pay complaint form (PDF).